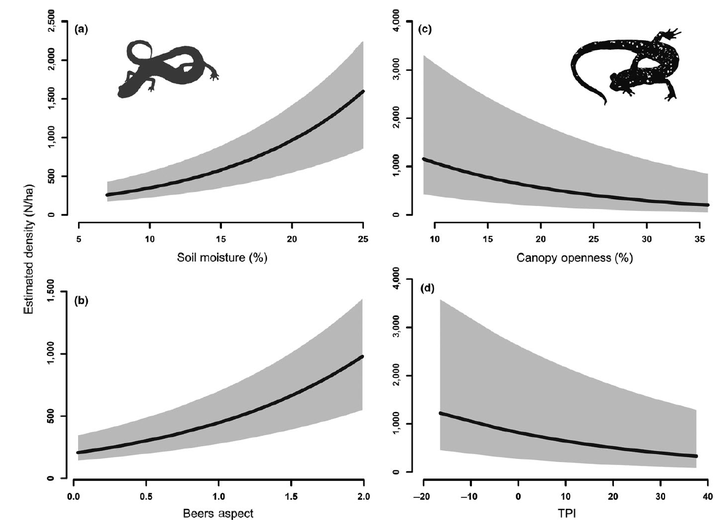 Woodland salamanders are among the most abundant vertebrate animals in temperate deciduous forests of eastern North America. Because of their abundance, woodland salamanders are responsible for the transformation of nutrients and translocation of energy between highly disparate levels of trophic organization–detrital food webs and high order predators. However, the spatial extent of woodland salamanders’ role in the ecosystem is likely contingent upon the distribution of their biomass throughout the forest. We sought to determine if natural environmental gradients influence the fine-scale distribution and density of Southern Ravine Salamanders (Plethodon richmondi) and Cumberland Plateau Salamanders (P. kentucki). We addressed this objective by constructing occupancy, co-occurrence, and abundance models from temporally replicated surveys within an old-growth forest in the Cumberland Plateau region of Kentucky. We found that Plethodon richmondi had a more restricted fine scale distribution than P. kentucki (mean occupancy probability = 0.737) and exhibited variable density, from <250 to >1000 individuals per hectare, associated with increased soil moisture and reduced solar exposure due to slope face. While more ubiquitously distributed (𝜓 = 0.95), P. kentucki density varied from <400 to >1,000 individuals per hectare and was inversely related to increased solar exposure from canopy disturbance and landscape convexity. Our data suggest co-occurrence patterns of P. richmondi and P. kentucki are influenced primarily by abiotic conditions within the forest, and that populations likely occur independently and without evidence of biotic interaction. Given the critical role that woodland salamanders play in the maintenance of forest health, regions that support large populations of woodland salamanders, such as those highlighted in this study mesic forest stands on north to east facing slopes with dense canopy and abundant natural cover, may provide enhanced ecosystem services and support the stability of the total forest.